Another completed project is in the books this month! We officially completed the improvements and upgrades for the Grand Army of the Republic (G.A.R.) Park in Eaton Rapids, Michigan. This island already has an impressive history before we had the amazing opportunity to bring it back to life! In 1872, the island was owned by J.D. McAuliffe, and was much larger than it is now. It used to extend further south, almost to the main road bridge on State Street, and people would take their carriages around the island. It was also home to many animals such as bears, deer, raccoons, etc. In 1897, the City of Eaton Rapids officially bought the island and deemed it a city park. In 1909, the Island became the location for the annual encampment for the Eaton County Battalion of the G.A.R. until its discontinuation in 1929. However, the name ‘G.A.R. Park’ remained and now holds a few American History artifacts! On each end of the island, Civil War era cannons sit which were donated by the U.S. Government to the Eaton Rapid’s Rose Hill Cemetery before being relocated to the island and dedicated as Silent Sentinels to those who served in the Civil War. In the center of the island, a large monument was brought from Rose Hill Cemetery, known as the G.A.R. Monument to Our Fallen Heroes 1861-1865. In 1973, a group was formed to save the island from erosion and bring focus back to the community spot, which has been used for countless weddings, concert, and picnics.

When we first received the project, we were met with a regular park. It had a simple playground and 2 entrances – the original concrete bridge and the ‘newer’ bridge that was in desperate need of repair and improvements. The island is located in the Grand River, which is Michigan’s longest river at 252 miles connecting Lake Michigan and the natural springs in Somerset (Hillsdale County).  Its watershed is second largest in the state with a draining area of 5,572 square miles. There are also 14 dams located along the river, with one of them just upriver from G.A.R. Park at State Street. Overall, we had a lot to update on the park, as well as things to ensure the community can maintain the park for generations to come!

The largest improvement that was critical in saving the island was creating a better retention wall to eliminate erosion. The original wall was a simple concrete wall; however, it was no longer high enough to prevent flooding. To create a new retention wall, steel sheet pilings were pounded 18 feet below the riverbed outside of the original wall with a 9,000lb vibratory head! Once the pilings were all placed, we backfilled the space and finished concrete flatwork on top that acts as the surrounding border around the island. It allows a stable place for local fishers to stand without getting muddy, as well as the ducks and geese to sit in the sun while maintaining the island grounds.

Since we created a new retention wall that was higher to prevent flooding and erosion, the ground was now lower. To level everything, we added topsoil to the ground thus ‘raising’ the island 8 inches. This eliminates any trip hazards as well as small water holes that can erode the island from the inside. 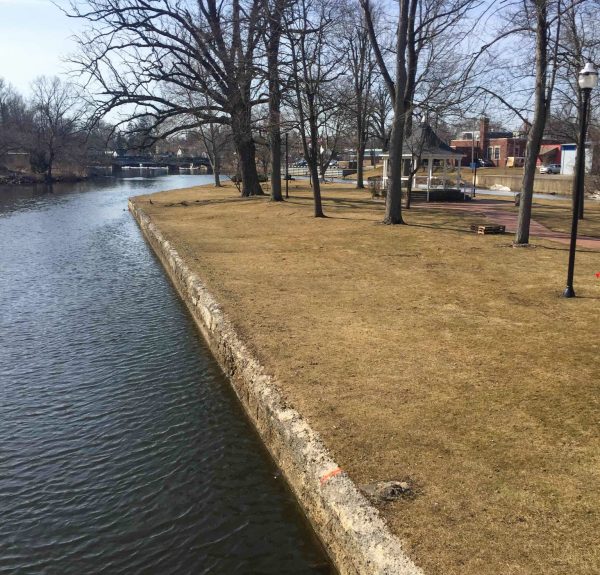 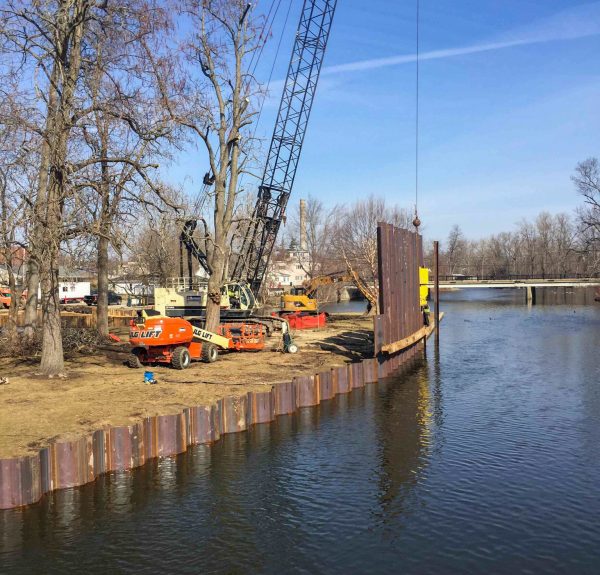 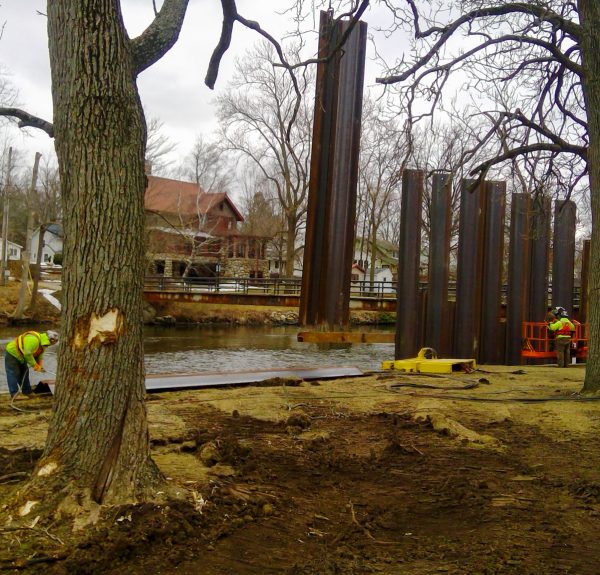 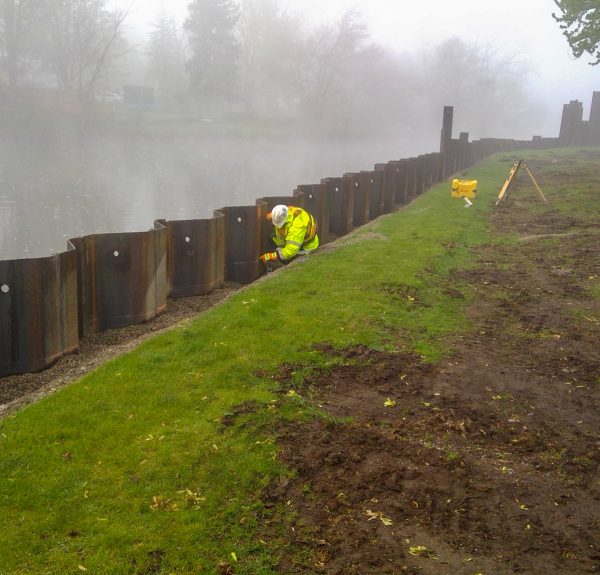 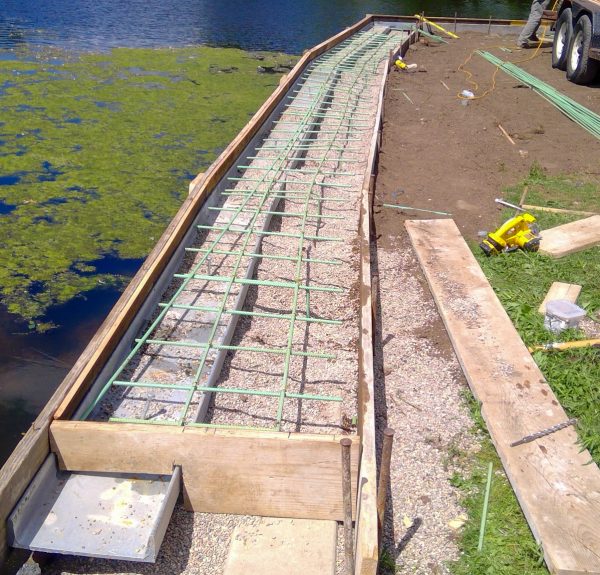 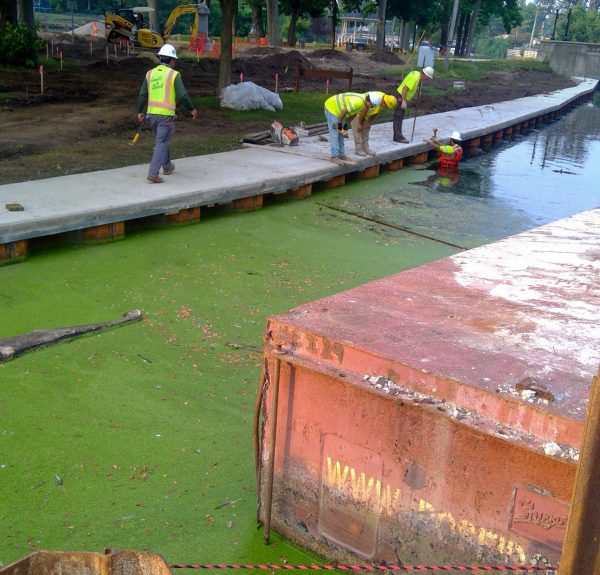 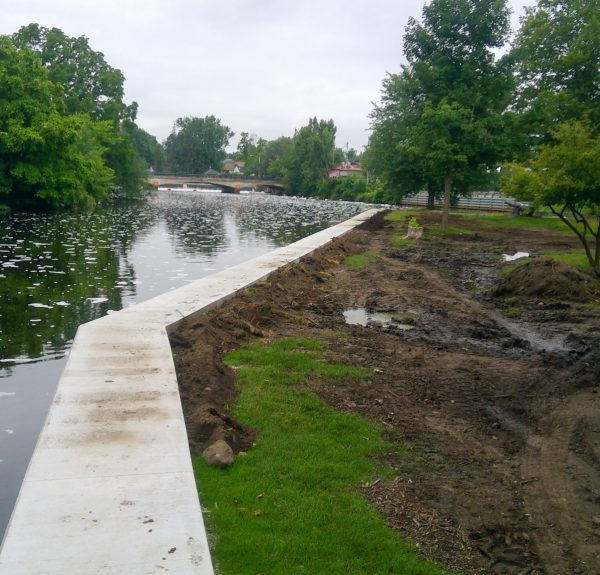 The original bridge was a simple concrete and metal structure and was beginning to lose structural integrity. We demolished the bridge, as well as the supports in the river. We created cofferdams using more steel sheet pilings in the river and bridge ends to create a designated work area; then following the dewatering processes to remove the water inside the cofferdams so we could begin constructing the new supports. This process allowed us to create the concrete foundations for the bridge under the river, which extend below the riverbed by 7 feet. The H-Piles used to bring extra support to the large bridge extend an impressive 32 feet below the riverbed! Heavy duty rebar was also used within the supports to maintain the shape over time and shape the concrete for the bridge ends. The concrete was poured in a way, so the bridge fit perfect into the foundations rather than just sitting on top. The bridge was placed using a crane that was positioned on a barge in the river, which was the first time we attempted this process! The bridge came pre-assembled, and the crane lifted each section off the truck and helped guide it into place on the foundations. Once the bridge was placed together, we got to work on paving the walkway, and installing benches on the side deck.

Along the river, both beside the island and downstream, we created boardwalks equipped with fishing piers! First, we cut out any vegetation that would be in the way, and then staked out where each support pile would go. After driving them into the ground and riverbed, we were able to attach boards creating the main support braces along the boardwalks. Once, all the supports were created, we were then able to construct the framing. The fishing piers extend over 20 feet outwards from the boardwalk into the river allowing plenty of space away from others to properly cast out. The walls were also constructed during framing and finished with a chain link fence along the entire boardwalk.

The original playground was very outdated with a swing set, a small climbing ladder, and a play truck. There was also no ground protection or designated space for the equipment as it was scattered amongst the northern end of the island. Once we had all the retention wall sealed, and the bridge was being finished, we started working on the new playground! We created a designated space for the new equipment, which features a large climbing structure with multiple slides and ladders. We also installed a new swing set that is stabilized in the ground. Finally, we installed a protective padding across the entire playground, which is extremely bouncy! With this new playground, locals can feel at peace knowing their child is physically protected while playing, and also has many outlets for their imagination to run wild!

This project wouldn’t have been possible without the help of our amazing subcontractors and city personnel!

This project was truly an awesome experience for us, as we got to use processes that aren’t typical of most projects. We are so honored to have brought this amazing park back to life for the Eaton Rapids community and it’s become an amazing spot to enjoy the summer! We also got amazing drone footage of the completed project, which you can watch here, or on any of our social media pages! We hope you enjoyed this blog and make plans this summer to check out G.A.R. Island Park!